With the onset of public exams, life is going to be fairly subdued at The Holt for a few weeks, however,  last week certainly makes up for that in terms of activity!

Year 11 customised their shirts on Thursday and enjoyed Instagram moments alongside and fizzy drink as they savoured their last compulsory lunchtime on their last official day in school. Even Mrs Williams, Head of Textiles and Technology was impressed with the level of detail and quality in the execution of the embellishment!   The Year 11 girls remained focused in most lessons as they honed in on their AO1, AO2 and the very important AO3 and AO4s….a special language for GCSE and A level students but to everyone else….assessment objectives set by exam boards!  We even let them have their hair down for the occasion!

Miss Keeley took two Year 7 and two Year 8 students to the Salter’s Institute Chemistry Competition at Reading University. They competed against multiple schools in two very tough competitions; they got to work in a university laboratory and really excelled in their research. The chemical magic demonstration at the end of the day had lots of wow moments and all four girls left feeling inspired! 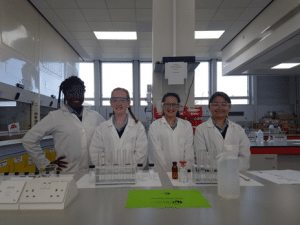 The PGL Netball Tour over the weekend was incredibly successful with five teams gaining medals. The Year 7A, 8A and 9A teams won each of their tournaments in their age category even after being against some very tough competition. Well done!  When the girls were not playing netball, they had the opportunity to go on various activities such as the giant swing, Jacob’s ladder and archery. Over the weekend, the girls showed true grit and determination during their games while showing sportsmanship and respect to the other teams and umpires. Mrs Elford shared how lovely it was to see how supportive each year group were with one another both on the netball courts and whilst taking part in the activities. The highlight of the tournament, which was very reflective of the commonwealth netball, was the Year 9A team final.  They were drawing 9-9 when awarded a penalty in the ‘D’, which means that when the final whistle blew the penalty must be carried out….. Lucy Barker took the penalty and scored… we were the winners of the tournament!!!  Thank you to Miss Elford, Mrs Bolton, Mrs Woods, Miss Norris and Miss Shepherd – they all said the weekend was fantastic and the girls had a great time!

On Saturday, Mrs Pearce and I watched 14 Year 9 girls take part in the regional Magistrate “Bar Mock trials” competition at Reading Crown Court.  We sat in the gallery along with the girls’ parents, who were just in awe of their daughters’ performances…..they really rose to the challenge of standing in a and holding their own!  The team had to take turns in being the defence and prosecution, both times up against a different school.  They were judged by magistrates and at the we were announced the winners ….and gained a place in the national finals in Birmingham.  A tremendous achievement!  Mrs Allison, Miss Roberts and Miss Harris worked tirelessly over the last two weeks to coach the girls so they were on top form on Saturday – thank you!

Mrs Pearce, Mrs Priddy and I met with some exhausted, aching but happy Year 9 girls on Monday.  They were lucky enough to be selected to participate in the Ten Tors Challenge in Dartmoor, run by the British Army.  The girls were all part of the same Guides group been training for months so that they would cope with the 35 miles hike over Dartmoor in two days!  The girls ate dried food – which they said was surprisingly good – I presume it was like a pot noodle – and were wild camping including ‘wild toilets’…a trowel, toilet paper and a lighter!  The girls said they learnt a lot about the importance of as they took it in turns to be the jolly one motivating the others as they staggered up the tors and they said they were stronger in character for the experience….one of them even mentioned the word resilient!

The enrichment activities that took place last week enabled many girls to take on new experiences and probably help shape their future lives in some way. The girls will feel more confident in themselves, in working with others, and in thinking that ‘they can give it a go’….not always winning but certainly gaining from the opportunities; confidence, stronger relationships with the teams and a sense of awareness of different jobs/occupations that people do.  Of course, these experiences only happen because our dedicated staff and in the case of Guides, volunteers, are happy to generously give time and commitment to the events.  Mrs Pearce, parents and I are so grateful to all the staff who are involved extra-curricular activities.  It is important that girls take on these challenges and they should not be afraid to fail and make that an excuse not to take part.  Their learning will be invaluable and if failing does happen – that is a strengthening experience in itself.  When success does come, it feels so much better when girls have had to fight for it or have experienced disappointment on the way to success.  I am so happy to write that our girls’ sense of gratitude towards their teachers and volunteers for organising the activities was lovely to see and they practised humility as they thanked their teachers and volunteers for their time and support.  Gratitude and humility – characteristics that will ensure our girls go far!