Welcome back to the new half term. I hope you had a lovely break and if you have children sitting GCSEs and A levels, I hope they got plenty of rest in between all that studying. Chez Pearce, we are also in full swing and so I made myself useful over the half term supplying cups of tea and Malteasers at regular intervals and of course giving plenty of moral support!

The peak of excitement in our household last week however, was the football on Saturday! My husband being from Liverpool and therefore a lifelong Liverpool supporter was delighted by the outcome of the game. Although it was by all accounts a boring match………. (so I am told) but I was more interested in how the players and fans spoke about their manager Jürgen Klopp. Amongst the things they said was “he just gets us”, “he is enthusiastic” “he lets the players be themselves”, and “he cares about us even if we are not on the team”. Mrs Kennedy’s husband is an ardent City supporter and following City’s success this year , we were talking about the leadership traits of Pep Guardiola, who is very hands on …….it is always very interesting to consider the many different leadership styles out there and to learn from good practice.Neither of us are that keen on football but we do pick up some things from the constant commentary on the TV and Talk Sport in our homes that we can bring to The Holt!

We are doing our bit to share our own leadership model and were delighted to again be approached just this week by another secondary school to advise them and their governing body on the “Co-Headship” model of school leadership, the fifth this year and it is always good to expand the Co-Headship network around the country!

Before half term, we were delighted to learn that following the success of our Bar Mock trial team making the National final for the second year running, Megan Beavis, our court artist, won this year’s Young Citizens Court Artist Competition.She was selected from over 45 entries by the Young Citizens team.This is what they said; “We really love the way Megan captured the courtroom, from details such as the magistrate’s notes on the bench, to the expressive and emotive expressions on each person’s face. We thought her choice of perspective from the magistrate’s bench provided a particularly unique view of court proceedings. We felt that an exploration of colour in her entry could really have added to the vivid experience of the courtroom. However, her attention to detail and her ability to capture the feeling of being in a courtroom really stood out.” Megan will be presented with the trophy at the finals at The Royal Courts of Justice on the 15th June.Here is the winning picture. Well done Megan! 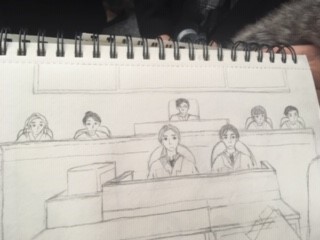 We were also delighted to hear some good news from the maths department last half term as they received the results of the Junior Maths Challenge. Our students earned five gold certificates, 18 Silver and 28 Bronze!  We also had three students go through to the Junior Kangaroo; Eve Pickwell, Maya Platt and Samhitha Dinakurti. Dana Abzhanov even got through to the Junior Olympiad, she is the first student from The Holt to get through to this stage. Well done to you all and thanks to Miss Pyle and the maths department.

Now for some community news; I would like to thank everyone who responded to the “community resilience” questionnaire that was sent out a week or so before half term. We had a good response from The Holt along with other local schools. The outcomes of the survey will really help establish some much-needed projects that will be run by various community groups alongside Wokingham Borough Council to benefit the local community. We look forward to keeping you posted!

Lastly, as I prepared to come back on Monday, I did that thing that, as far as I am aware, only teachers do ……I counted how many weeks we have this term. This is a terrible habit! The life of a teacher seems to work in six or seven week blocks……which then fly by ……so as we enter the “home straight” of this academic year we look forward to all the summer events; taster days, prom, leavers’ ball, Sports Personality of the Year, sports day, a multitude of House events and of course we meet our new Year 7 students and parents! A packed half term, which no doubt will fly by!

I would like to end this week’s blog by wishing our Muslim community a very happy Eid.