Mr Marrison and three colleagues departed this morning with 50 girls from Year 11 and 12 for an exciting four days in Iceland, where they will learn about volcanos and earthquakes at the LAVA centre, visit beaches and a sun glacier, enjoy the secret lagoon and finally do some sightseeing in Reykjavik. We wish them a good trip!

Mrs Whitehouse, Head of Biology, Miss Keeley and Miss Izod returned to school at the weekend from a three day trip to Exmoor with Year 13 biologists. They stayed at Nettlecombe, completed a set of practical activities, and covered the ecology theory part of the course. On Wednesday afternoon they took samples from a rocky shore, looking at the distribution of organisms as the height of shore increased, using a belt transect. On Thursday, the students walked across Exmoor following a stream, kick sampling the invertebrates at three different sites. They also investigated invertebrate responses to different environments. It was freezing but the weather held and they saw Exmoor ponies and red deer. They also set mammal traps and were lucky enough to catch a vole, which are endangered, (less than 50% of groups are able to see them) and several field mice, these were weighed to add to the centre’s research before being released. On the final day, the students interpreted data from a seasonal spring as well as investigating the difference in diversity on mown and grazed lawns. Thank you to Mrs Whitehouse for organising the trip….the students were immersed in ecology for sure!

The hall was packed on Thursday night for the Year 7 music concert with a Disney theme. The soloists played beautifully and the mass choir performed sang Colours of the Wind, Hakuna Matata and Touch the Sky flawlessly. The 160 girls looked like they were enjoying themselves and the parents seemed to have a lovely time too…..well done to Year 7 – after just 7 weeks in school they performed brilliantly. Thank you to Mr Gray, Head of Music and to Mrs O’Reilly for organising the concert. 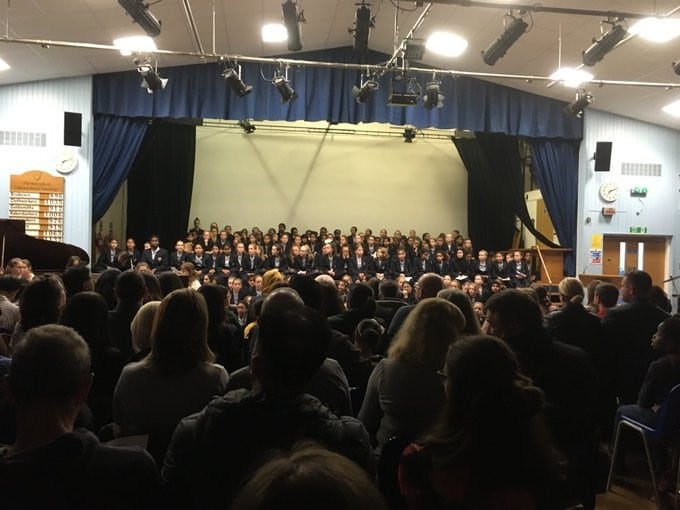 Year 13 are submitting their UCAS forms right now and we move into the interviews and offer stage of the process. Our medics had to have their UCAS forms in last week and they wait to hear from the universities…..in preparation for the tough and highly competitive interviews, Mrs Whitehouse set up some MMIs (multiple mini interviews) for our medics. We were very grateful to former student Laura Burrows who is taking a gap year before embarking on her medical degree – she came in to prep our Year 13 medics. The girls had to move every 7 minutes from one interview to another and answer unseen questions around topical issues such as obesity and BREXIT, empathy, compassion, and ethics and they had a bedside manner role play too! Good luck to all our Year 13 with their university applications.

Mrs Hart, our careers lead, welcomed representatives from twelve universities on Tuesday to make up our first mini universities careers fair for Year 10, 11 and 12 students. The event was well attended at lunchtime, period 5 and after school. It was good to see so many Year 10 and 11 thinking about their future plans and asking sensible questions about different courses. Thank you to Mrs Hart for organising the event.

Finally, we welcomed Soulscape into school on Tuesday to deliver a drug awareness workshop under the theme ‘Give and take’. Using creative methods including film-making, dance, music, theatre and visual arts, Year 8 explored decision-making, good friendships and living a positive lifestyle. They discussed addiction and how it affects people’s lives and understanding how to resist peer pressure and gain self- esteem and confidence. Thank you to Mrs Dakovic, Head of PSHE for planning the day and of course, to the volunteers of Soulscape who always deliver sessions that are of high quality and thought provoking.

A busy few days! Mrs Pearce and I wish you all a good half term and our students deserve a rest – they have been fabulous this half term and a special well done to Year 7 – it is a big deal getting through the first half term of secondary school. They have settled in really well.