Our Year 12 students celebrated their achievements during a GCSE certificate presentation morning on Monday. We were delighted to welcome back Mrs Holland, who retired in the summer, to be part of the celebrations of her very last year group. Gemma played Czardas by Monti on her violin and Lydia played the guitar and sang Toxic by Britney Spears. Jossie, Amie, Olivia, Alice and Marion shared their memories of life at The Holt from Year 7 to Year 11. These included reminiscing about the discos in Year 7 and 8, the home learning projects, sticks to measure the length of their skirts, the to the , of the Prom along with other small misdemeanours that happened over the last five years. Alongside the girls collecting their individual certificates, we gave out fifteen progress awards. These were for those students who made relatively more progress between KS2 and KS4 compared to their peers. Natasha Bennett won The Holt Association Endeavour Award and Lizzie Smith won the Charlotte Evans Award for service to the school. Well done!

Former student Sarah Holmes (née Wilkins) presented the certificates to the girls. She left The Holt in 2004 (Mrs Holland was her Head of Year and I was Head of Sixth Form when Sarah was in form…it was a slightly surreal having a chat to a former student about breastfeeding!). She graduated in 2007 with a physiotherapy degree and achieved a master’s degree in Sport and Exercise Medicine. Sarah is also a competitive athlete and a mum to 10-month-old Harry! Sarah currently works with Reading Women’s Football Club after working with multiple GB Teams including the British Triathlon, British Rowing, British Fencing and British Athletics as well as at the FA. Sarah was also selected to provide physiotherapy cover at multiple sports events including the London 2012 Olympics and Paralympic Games, Glasgow Commonwealth Games and the University Winter Games.

Sarah’s sincere and personalised message to the girls was about working hard, looking for opportunities to gain experience (and not being paid for them!) as well as the importance of networking and seeking advice from others who have achieved success. We appreciated that Sarah shared her disappointing moments too, so our girls realise that success is not all straightforward or down to ‘luck’. The speech really was spot on! To end the celebration, parents, students and staff enjoyed a pastry and coffee in the Sixth Form Centre. Thank you to Mrs Smith who coordinated the event and to all the parents who were able to attend as well as huge congratulations to all our Year 12 students for their success at GCSE! 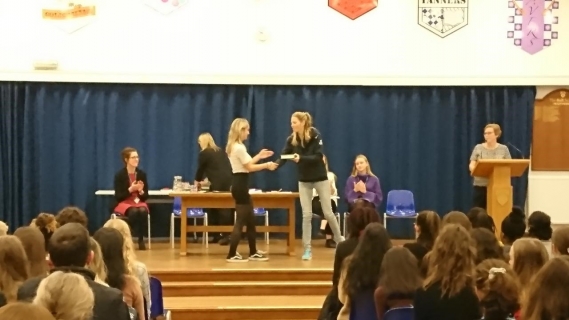 The current Year 11 sat their English PPE (mock) on Thursday and were able to relax from the daily routine of school as they attended the sixth form taster day on Friday. Mrs Bellis and Mrs Kemp, Heads of Sixth Form, welcomed Year 11 and some students from other schools during a brief assembly. Students then went off to try out four different A levels lessons or they attended sessions run by local colleges. We are grateful to Mrs Hart for organising four colleges to come in to explain the different vocational courses that they offer and the application process. Our current Year 13 and Year 12 students also contributed to the day by delivering sessions on ‘Life in the Sixth Form’. Thank you to Mrs Gale, Mrs Hart, Mrs Bellis and Mrs Kemp for organising the day as well as to all the staff who planned special sessions for the students. We were delighted with the feedback from Year 11 and hope that many decide to stay on at The Holt for A levels. The overwhelming message is that you will be well supported, there are many opportunities (ref Sarah’s message above!) and our teachers deliver great lessons! 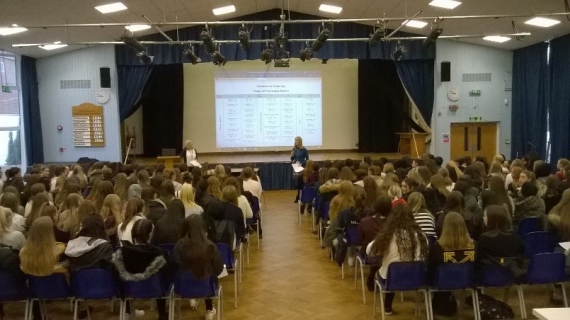 Wokingham Foodbank fed 2000 families since August, a shocking statistics in a seemingly affluent constituency. Year 13 economists Becky Payne and Ellie Leahy dropped off 50 advent calendars, all kindly donated by sixth formers. Thanks to Becky and Ellie for organising the collection and encouraging their peers to donate. Thank you to all the sixth formers too! 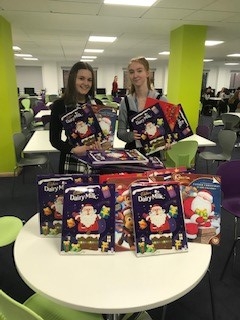 Last week, Miss Shephard, Head of Year 9, organised for her climbing friend Dr Emma Howson and her colleague Dr Mark Fife, who both for the Pirbright Institute https://www.pirbright.ac.uk/users/dr-mark-fife to speak about their passion and enthusiasm for science at a STEM Society meeting for Year 9 students and sixth formers (again opportunities arise through networking …ref Sarah’s speech).

Mark gave a gripping presentation to the Year 9 GCSE science group and A-Level scientists at lunchtime about his experiences as a scientist in West Africa during the Ebola outbreak. It was amazing hearing about how they were investigating how to contain the terrible disease. Emma, a leading scientist in the world on foot and mouth disease, talked about how she worked with numerous different tribes in various countries in Africa to help her create a machine to test for foot and mouth in the field. The implications are that if there is ever an outbreak again, it could be contained quickly and avoiding mass culls of livestock that make up the livelihood of farmers. Miss Shepherd is a farmer’s daughter and during her she remembers the devastation of foot and mouth in the UK so this made it even more real for the girls as she shared her experiences with them. The Year 9s and 6th form prefects are going to create and lead an assembly on bees and conservation to Year 9 and Year 8 (they are building bug houses) to pass on the science that they learnt and the message that everyone can make a difference.

Our future scientists, engineers and doctors…willing to give up a lunchtime (another ref from Sarah’s speech to networking/find out how about how others have achieved success…)!!

Last week, Mrs Barker, Head of Philosophy and Religion, arranged for Year 7 to take a walking tour of local churches. The POR department’s aim was to explore some of the diverse Christian communities within Wokingham. They wanted Year 7 to compare the places of worship and gain an awareness of how the different denominations work within the Wokingham area. Mrs Barker was grateful for the warm welcome she and the students received from All Saints Parish Church, The Salvation Army, Wokingham Baptist and St Pauls Church. Year 7 explored the churches, asked many questions, and appreciated the juice and biscuits!

Thank you to Soulscape who organised the logistics of the day and to Mrs Barker and the staff who willingly gave up their time to accompany the Year 7 students. The trip will go out again with the other half of the year group next week. 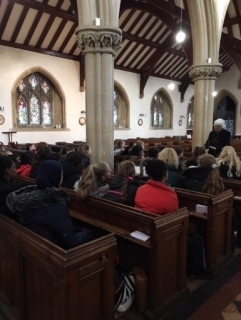 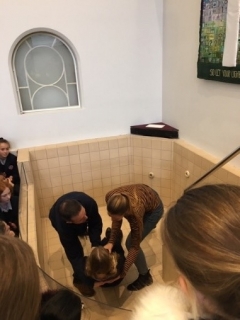 The POR department always looking to forge links with other faith communities. If there is anyone in The Holt community with access to a faith group, the POR department would love to make contact and possibly work with you in the future. Please email e.barker@holt.wokingham.sch.uk.

The actors from the Onatti Production Company performed a French play to Year 7 girls on Monday ‘Ticket pour ’ – a cosmic French play for beginners with native French actors. Thank you to Mrs Davis for organising the event. 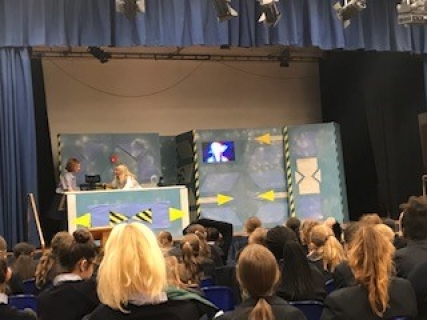 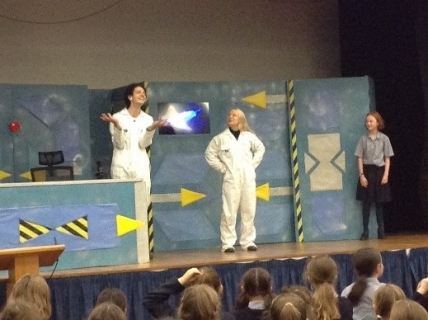 Last week the Art Department organised a House Christmas craft day for students across all year groups. They have produced some beautiful work to sell at the Christmas Fayre on 7th December. Thanks to Mrs Webb for organising the day. 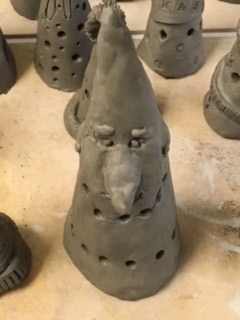 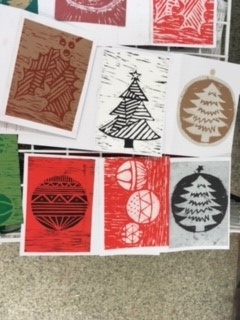 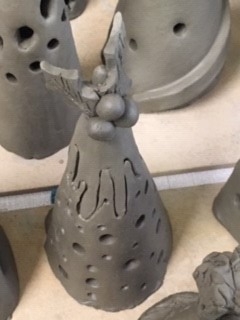 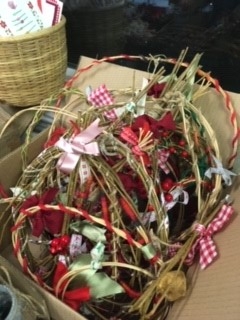 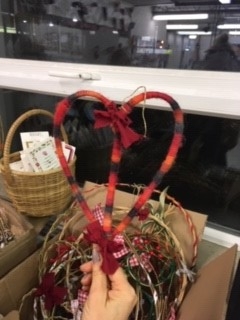 Finally, Miss Shephard, who leads on Rugby in the PE department and Mrs Tearle, Head of Maths and an avid rugby fan by coincidence both are loyal followers of Bath RFC organised a trip to Twickenham last Saturday to watch England Women v Ireland. It was a great match and to top it England won as well as the girls making it onto Sky and the tickets were free! Thanks to Miss Shephard and Mrs Tearle for giving up their time on Saturday. 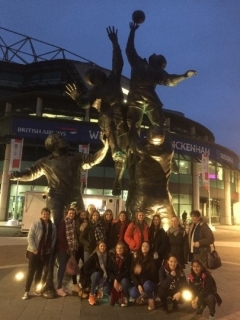 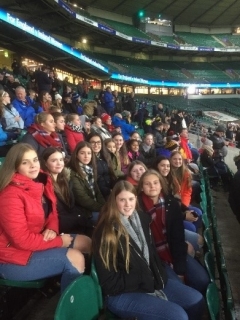 Phew – a busy week ….again!
We look forward to meeting our Year 11 parents on Thursday at parents’ evening and next week the Christmas tree arrives to take centre stage in the Hall with just three weeks until the end of .
Have a good week.
Anne Kennedy